Perigord is inland from the Atlantic and north of the Pyrenees. Archeological digs here have uncovered many cave sites carved into the rocks along the river, including the ancient Lascaux cave with its prehistoric paintings.  We installed ourselves in Perigueux to explore the area better.

We headed out to Sarlat to its weekly Saturday market and encountered the largest mass of tourists I remember outside of Paris.  French, German, American, Dutch and more.  It was one of the most overwhelmingly touristic experiences of my travels and completely unexpected.
Of course, blended in with the tourists were the ever-patient residents of Sarlat struggling to buy their fruits, vegetables and what-have-you necessary for their daily lives.
The high point for me was a taste of the local foie gras. Lovely.  We ended our stay there with a delicious coffee and pastry and headed off to partly retrace our steps to Sarlot from Perigueux.


Stopping at La-Roque-Gageac along the Dordogne River, we discovered the town is just as it's portrayed in many a photo--houses built into the hill and above, what appear to be holes in the rocks where families lived in ancient times--and some not so ancient times.
Birds have found homes there and as I looked up above the houses, they soared around in great numbers.
Groups enjoyed the river in canoes and kayaks as well as a boat that accommodated many people motoring up the river and down.  It looked most inviting in the heat.

From La-Roque-Gageac, we climbed up to Beynac, one of the finest chateaux in the area.
During the Hundred Years' War (1337-1453), this chateau was alternately occupied by the English and the French. Starting in 1429 Joan of Arc was able to rally the troops; and though she was burned at the stake in 1431, the momentum of the French had taken hold and the war ended in 1453.

Across the valley from Beynac is a chateau that had been owned by Josephine Baker who lived there with her 12 adopted children of global origin (Korea, Venezuela, Morocco, France, Japan, Colombia, Israel, Algeria, Ivory Coast and Finland) until she moved to Roquebrune, near Monaco.

Driving back to Perigueux, we passed through Les Eyzies and St. Christopher to Thenon.  Our final stop was a goose farm where we watched the flocks move around after their leader like a flock of sheep or the gaggle of geese that they were.  What a kick. 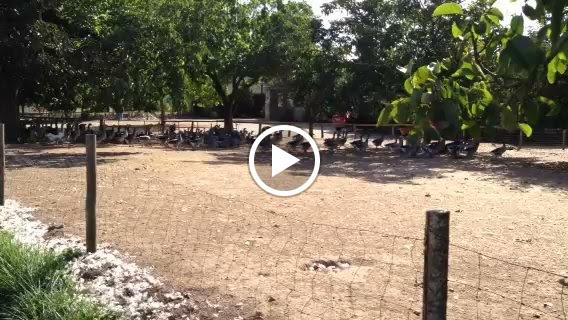 They were probably on their way back to the barn to be force fed so their livers would fatten up to be eaten later by the likes of me and other foie-gras appreciators. Gory as it sounds, it didn't appear to me that these animals were under any stress in the process.

This area is where we have to remind each other that it's impossible to see everything there is to see and that it's a damned good excuse to have to return.  We'll be returning. . .
Posted by Penattheready.com at 2:45 PM